A pilot study on the feasibility of testing residential tap water: Implications for environmental justice and health

A pilot study on the feasibility of testing residential tap water: Implications for environmental justice and health 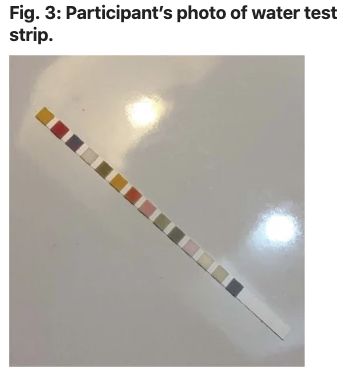 Hi all…there continues to be a number of non traditional drinking water papers being published recently. A new paper entitled “A pilot study on the feasibility of testing residential tap water in North Carolina: implications for environmental justice and health” got my attention. The study used a “14-in-one dipstick test designed to measure trace amounts of heavy metals, non-metallic elements, and physicochemical water properties in drinking water in 70 homes.” The article offers a very different perspective, using citizen scientists and addressing implications for environmental justice and health. This makes it an interesting read but I am going to focus on the tap water data aspect here.

I’m guessing that most would expect to see that lead would figure prominently and it does, along with chromium and mercury being in the top three. In fact, the abstract reports that mercury was detected above the USEPA maximum contaminant level (MCL), of 0.002 mg/L (2 ppb), more frequently than any other parameter! I checked to see what the USEPA suggested are sources of mercury and they indicate erosion of natural deposits; discharge from refineries and factories;  and runoff from landfills and croplands.

However, the finding was so unusual that I read the paper carefully to try and understand what made this study so different. In fact, the abstract is not consistent with the text which indicates about 27% of homes had lead levels above the USEPA MCLG of zero. Approximately 3% of all homes indicated “precarious levels of lead above 5 ppb.” About 55% of homes had “high levels of chromium, above the USEPA drinking water MCL of 0.10 ppm.” About 7% of all homes tested at levels above the USEPA MCLG of 0.002 ppm of mercury. I contacted the authors who, as it turns out, noticed the inconsistency earlier and had contacted the journal to make the correction. Unfortunately, it has not been done to-date. Nonetheless, the finding that mercury was present and exceeded the USEPA MCL in 7% of samples was still unexpected (at least for me). So, just to be clear, in 50%, 25%, and 7% of water samples tested, the concentrations of chromium, lead, and mercury, respectively, were higher than USEPA drinking water standard. So while mercury was third highest, chromium exceedances (55%) were higher than lead (27%)!

There were other contaminants detected, for example ~ 17% of homes exceeded the US-EPA MCL for nitrate, which is a big deal. Note that the study reports exceedances of MCLs but also maximum contaminant level goals (MCLG), the regulatory implications of each being quite different.

A pilot study on the feasibility of testing residential tap water in North Carolina: implications for environmental justice and health

AIMS: This pilot study assessed the feasibility of (1) testing for the presence and concentration of 14 contaminants and physicochemical parameters in household tap water in a low-income neighborhood and (2) using community engagement for recruitment and citizen science approaches to data collection.

METHODS: We used a multistage approach that included geo-mapping to delineate testing sites, community engagement for recruitment and citizen science approaches to increase the response rate. We used a 14-in-one dipstick test designed to measure trace amounts of heavy metals, non-metallic elements, and physicochemical water properties in drinking water in a sample of 70 homes.

RESULTS: In 50%, 25%, and 7% of water samples tested, the concentration of mercury, lead, and chromium, respectively, were higher than US-EPA drinking water standards. Citizen science approaches were effective for increasing response rates and low income household participation in water quality testing.

SIGNIFICANCE: The overlap between poverty, older homes, and high concentrations of potentially toxic metals in drinking water presents concerns for community health. Our pilot community engagement and citizen science approaches are likely scalable and would be of benefit to both the scientific community and to municipalities with constrained budgets. Future studies may examine the role of the principles of environmental justice in the distribution and prevalence of toxic elements in drinking water.”