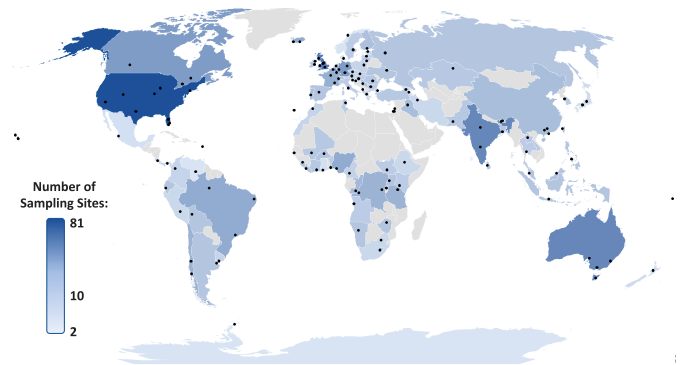 Hi all…a huge study on pharmaceutical pollution of the world’s rivers was recently published in the journal PNAS. The paper has 127 authors and presents “a global-scale study of active pharmaceutical ingredients (API) pollution in 258 of the world’s rivers, representing the environmental influence of 471.4 million people across 137 geographic regions. Samples were obtained from 1,052 locations in 104 countries (representing all continents and 36 countries not previously studied for API contamination) and analyzed for 61 APIs.”

The article appears to be available for free download but I’m not sure if it is for all. If you are interested but cannot download it please let me know.

“Despite growing evidence of the deleterious effects on ecological and human health, little is known regarding the global occurrence of pharmaceuticals in rivers. Studies assessing their occurrence are available for 75 of 196 countries, with most research conducted in North America and Western Europe. This leaves large geographical regions relatively unstudied. Here, we present the findings of a global reconnaissance of pharmaceutical pollution in rivers. The study monitored 1,052 sampling sites along 258 rivers in 104 countries of all continents, thus representing the pharmaceutical fingerprint of 471.4 million people. We show that the presence of these contaminants in surface water poses a threat to environmental and/or human health in more than a quarter of the studied locations globally.”

“Environmental exposure to active pharmaceutical ingredients (APIs) can have negative effects on the health of ecosystems and humans. While numerous studies have monitored APIs in rivers, these employ different analytical methods, measure different APIs, and have ignored many of the countries of the world. This makes it difficult to quantify the scale of the problem from a global perspective. Furthermore, comparison of the existing data, generated for different studies/regions/continents, is challenging due to the vast differences between the analytical methodologies employed. Here, we present a global-scale study of API pollution in 258 of the world’s rivers, representing the environmental influence of 471.4 million people across 137 geographic regions. Samples were obtained from 1,052 locations in 104 countries (representing all continents and 36 countries not previously studied for API contamination) and analyzed for 61 APIs. Highest cumulative API concentrations were observed in sub-Saharan Africa, south Asia, and South America. The most contaminated sites were in low- to middle-income countries and were associated with areas with poor wastewater and waste management infrastructure and pharmaceutical manufacturing. The most frequently detected APIs were carbamazepine, metformin, and caffeine (a compound also arising from lifestyle use), which were detected at over half of the sites monitored. Concentrations of at least one API at 25.7% of the sampling sites were greater than concentrations considered safe for aquatic organisms, or which are of concern in terms of selection for antimicrobial resistance. Therefore, pharmaceutical pollution poses a global threat to environmental and human health, as well as to delivery of the United Nations Sustainable Development Goals.”

Drivers of Disinfection Byproduct Cytotoxicity in U.S. Drinking Water: Should other DBPs be Considered for Regulation?

“This study reveals key disinfection byproduct (DBP) toxicity drivers in drinking water across the United States. DBPs, which are ubiquitous in drinking water, form by the reaction of disinfectants, organic matter, bromide, and iodide and are generally present at 100–1000× higher concentrations than other contaminants. DBPs are linked to bladder cancer, miscarriage, and birth defects in human epidemiologic studies, but it is not known as to which DBPs are responsible. We report the most comprehensive investigation of drinking water toxicity to date, with measurements of extracted whole-water mammalian cell chronic cytotoxicity, over 70 regulated and priority unregulated DBPs, and total organic chlorine, bromine, and iodine, revealing a more complete picture of toxicity drivers. A variety of impacted waters were investigated, including those impacted by wastewater, agriculture, and seawater. The results revealed that unregulated haloacetonitriles, particularly dihaloacetonitriles, are important toxicity drivers. In seawater-impacted water treated with chloramine, toxicity was driven by iodinated DBPs, particularly iodoacetic acids. In chlorinated waters, the combined total organic chlorine and bromine was highly and significantly correlated with toxicity (r = 0.94, P < 0.01); in chloraminated waters, total organic iodine was highly and significantly correlated with toxicity (r = 0.80, P < 0.001). These results indicate that haloacetonitriles and iodoacetic acids should be prioritized in future research for potential regulation consideration.”