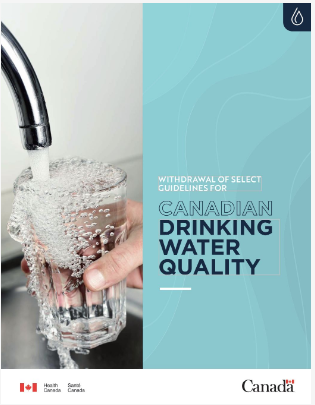 Hi all…Health Canada has withdrawn the existing Guidelines for Canadian Drinking Water Quality for 17 chemical substances, including 13 pesticides. The rational was described as being no longer required since these contaminants are unlikely to be found in Canadian drinking water at levels that may pose a risk to human health. The guidelines for the following pesticides were withdrawn: azinphos-methyl, carbaryl, carbofuran, diazinon, diclofop-methyl, diuron, metolachlor, paraquat, phorate, picloram, simazine, terbufos, and trifluralin. The other chemical substances withdrawn were 1,2-dichlorobenzene, 2,4-dichlorophenol, 2,3,4,6-tetrachlorophenol, and monochlorobenzene. However, two of the compounds that were included in the withdrawal of select guidelines, diuron and diazinon, were assigned drinking water screening values of 0.03 mg/L (30 µg/L) for Diuron and 0.015 mg/L (15 µg/L) for Diazinon.